If you’ve been paying attention, you’ll know that bonds aren’t what they used to be. Values are declining, risk is up, investors are selling, bond funds are underperforming, and municipal bonds are no longer the safe haven they once were.

“With the demise of the bond insurance industry in the financial crisis, credit quality in the market has become a much bigger concern for investors,” reported financial journalist Andrew Osterland on February 28, 2018 for CNBC.com. Earlier in the year, Financial Times noted sell-offs and declared that “the long bond rally could stall—and perhaps even unravel—in 2018.” Bloomberg.com noted “concerns over volatility” in high-yield bonds. Even Kiplinger.com, which typically faithfully tows the line of “typical” financial advice, had harsh words for bonds in a December 2017 article:

"The outlook for the bond market is bleak. With the benchmark 10-year Treasury yielding a paltry 2.36%, it’s simply not worth the risk to own it. Should market rates rise just one percentage point, the price of that 10-year bond would fall about 9%.”

Unfortunately, some investors mistakenly believe that bonds can’t or won’t lose money. But as Kent Thune explained in a December 2017 article on TheBalance.com, a “common misconception among beginning investors is that ‘bond mutual funds are safe.’”

The 2008 stock market crash, instead of protecting municipal bond investors, Bloomberg Barclays Municipal Index lost nearly 2.5% in 2008 during the stock crash. “That’s hardly catastrophic, but it might not have represented the resilience that the bond investors were expecting,” notes Morningstar analyst John Coumarianos, before making an ominous prediction that “results might be less benign during the stock market’s next wipeout.”

Municipal bonds have indeed become increasingly unpredictable in recent years. In January of 2018, the Wall Street Journal announced, “Muni Bonds May Not Be the Reliable Bet They Once Were,” advising investors to “understand the risks” and “adjust their strategy accordingly.” The asset class has fundamentally changed since the Financial Crisis as an increasing number of cities, states, and now Puerto Rico have defaulted on obligations. Furthermore, when municipalities go bankrupt, bondholders must wait in line behind employee pension funds for payment.

Even diversified muni-bond funds have suffered. “January is usually a stellar month for the municipal bond market. Not this year.” Citing a 1.18% loss for the month in the Bloomberg Barclays Municipal Bond Index, Osterland notes it was “the worst January for municipal bonds since 1981.” Since January, the fund has continued its decline, posting a year-to-date loss of 1.65% on April 24. 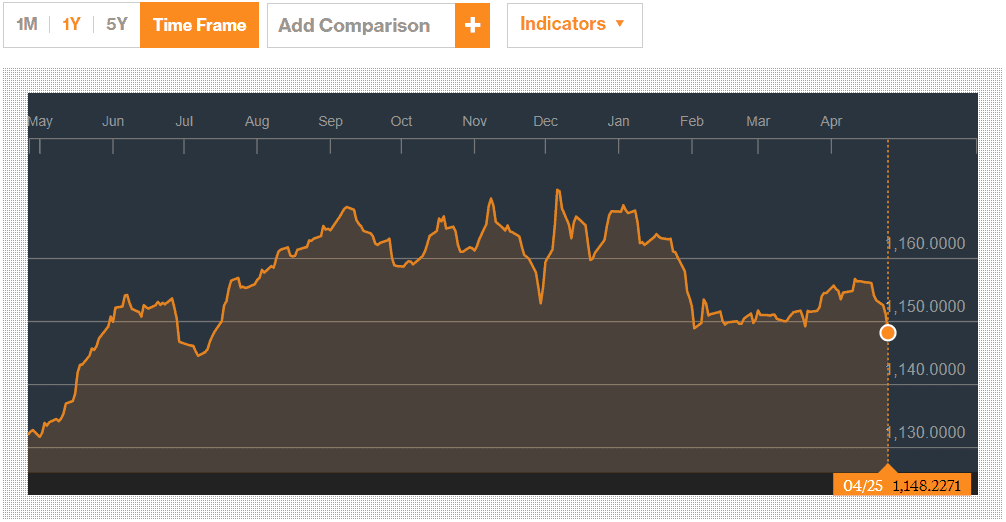 Add rising interest rates to the mix and lowered corporate taxes, which decrease incentives for muni-bonds, and we could be in for worsening woes.

“Interest rates have hurt the market,” Tom Hession, managing partner of Riverbend Capital Advisors told CNBC.com regarding municipal bonds. “People see rates going up and they sell.” Hession adds a backhanded recommendation: “Yields are more attractive than they’ve been in a long time, so if someone is comfortable with a more volatile environment, this could be a good time to consider municipal bonds.”

Meanwhile, Kiplinger columnist Steven Goldberg warns “income-hungry retirees” against reaching for higher yields from troubled companies. He argues that the purpose of bonds is not to earn income, rather, to decrease the volatility in your overall portfolio. But can we rely on bonds for steady gains? Perhaps not.
Goldberg goes on to halfheartedly recommend four bond funds which he sees as the best of a weak, unreliable asset class. Two receive this depressing warning: “Don’t expect either of the Vanguard funds to return more than 1% or 2% annually anytime soon.” One receives an additional warning that “you’d expect to lose roughly 2.6% if rates were to rise one percentage point.” The other two funds may return a bit more,

Goldberg says, adding that they are “quite a bit riskier,” investing in things such as so-called “junk” bonds and emerging market debt.

So much for bonds as the “safe,” steadily-gaining part of your portfolio!

While bond funds are generally less risky than stock market funds, with more moderated losses as well as profits, investors relying on bonds to provide gains if (or when) stocks fall could be in for disappointment.

What About Bond ETFs?

Experts like Hari Krishnan are exposing some serious risk concerning many ETFs out there, especially bond funds. In a large market correction like we saw in 2008 and 2000, these bond funds simply don't have the liquidity offer a reliable escape hatch.

So if not bonds, then what? It depends on what you were trying to get out of bonds.

If you were invested in muni-bonds primarily for income, we think there are other options worth considering. Private lending—the oldest form of investment around—is alive and well. Private equity funds, bridge loans, land leases, fractional real estate investments and other opportunities can generate regular monthly income. Depending on your situation, immediate annuities might be a good choice.

If you were looking to bonds for long-term safety and stability and reliable tax-advantaged growth, you should give serious consideration to high cash value whole life insurance. Dividend earnings rates vary according to age, health, and insurer, but net policy gains for cash value after costs are currently in the 2-4% range for many policy owners, when held long-term. (Plus there is an additional death benefit paid to beneficiaries.) Whole life insurance is also tax advantaged which makes the net return, after taxes, very respectable.

Importantly, whole life insurance is not an equity that will roller-coaster up and down, but a time-tested vehicle with guaranteed minimums. Dividends have been faithfully paid for well over 150 years, through every economy, and gains are paid, they are locked in. Furthermore, industry requirements for reserves make life insurance one of the safest places to store cash… certainly safer than muni-bonds in today’s market!

Don't give up on "safe money." Relying solely on a portfolio of nothing but mutual funds and ETFs is setting yourself up for failure without a safety net.

Check out my "soup-to-nuts" online course,
Whole Life Insurance Fundamentals
for everything you need to know about whole life insurance.

My mission is to teach people how to strategically accumulate capital in a way that makes all of their other financial activities perform better, and with less risk.

What are you doing, today, to ensure that you are in a position to take advantage of change, rather than react to it?